There are eight million stories in the Naked City. This has been one of them.

Narratively is in the fundraising stage on Kickstarter. Here’s the description:

New York is bigger and badder, weirder and sadder, and far more uplifting and intoxicating than the news headlines would have you believe. But too many of its stories are left untold. Narratively is changing that, and then we’ll do it in your city, too.

We don’t care about the breaking news or the next big headline. Narratively is devoted exclusively to sharing New York’s untold stories — the rich, in-depth narratives that get at the heart of what this city’s all about.

Narratively won’t use just one medium for these stories but the most appropriate one for each — longform article with portrait photos, animated documentary, photo essay, audio piece, short documentary film, for example.

Groundswell, an organization that pairs the making of public art with 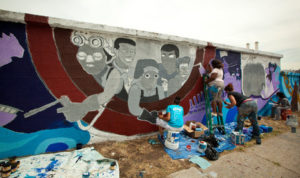 underserved New York City neighborhoods, is telling the stories of New York communities with public murals — about 400 of them so far. See a New York Times article on the project.

A History of New York in 50 Objects: For a British Museum’s BBC radio series and book, historians and museum curators were asked to identify 50 objects that could embody the narrative of New York. In the New York Times article that describes the project, users can read the story of each object by clicking on it. 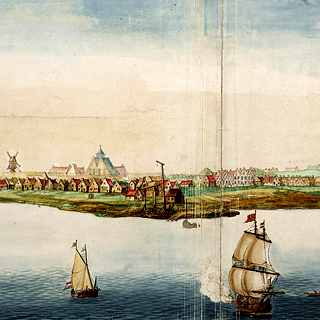 ONE TIME USE ONLY!!! View of New Amsterdam, Johannes Vingboons, ca. 1665, NYTCREDIT: National Archives of the Netherlands

New York continues to inspire   storytelling. I was prepared to note that the city now offers more than 8 million stories (given that “Naked City” ran 1958-1963), but I learned that the city’s population didn’t actually reach 8 million until 2000 and today is “only” 8.2 million.