Home » Storytelling and Change » Striking the Right Balance in Your Advocacy Story: #story12 John Capecci and Timothy Cage
Posted on April 19, 2012 by KatHansen

Hey, remember the other day in my recap of Bo Eason’s #story12 session, in

which I heartily agreed with his premise that “whoever is the best in the field gives the most of themselves” and “the more you give, the more you get paid and the more influence you have”? I did a little search here on A Storied Career and was not surprised to discover that I’ve used the words “generous” and “generosity” with regard to story practitioners 50 times.

John Capecci and Timothy Cage are just two more in the cavalcade of generous story practitioners.

If I were you, I would be a bit broken up if I missed John’s and Tim presentation at #story12 about how ordinary people become extraordinary advocates (although, as I’ve mentioned, it’s really not too late to register since registrants can access recordings of the sessions and all there other handouts and goodies upon registration). I would hate to have missed them because they were super presenters — easygoing, relaxed, conversational, and nicely tag teaming off each other. And they had terrific slides.

The session featured content that comes from their new book, Living Proof (see its TWO subtitles in the graphic at left below).

In their #story12 session, John and Tim talked about some of the book’s major premises. They assert that anyone seeking to tell an effective story for advocacy needs to strike a balance between the Raw Story and the Canned Story. You can see the slide describing the characteristics of each here.

An effective advocacy story, unlike the Raw or Canned Story, has five qualities, John and Tim, note. Here’s where their generosity comes in. If you missed their session, you can still download their Checklist: The 5 Qualities of Effective Advocacy Stories from their site. The qualities are that the story is focused, positively charged, crafted, framed, and practiced (more explanation on the checklist).

The other free downloads on the site have less to do with crafting stories than with telling stories to the media and are listed at the bottom of this post.

BUT, you can check out a pretty a pretty healthy chunk of Living Proof in a sample (click on the “Read a Sample” graphic on the home page). The first six chapters are about how to develop effective advocacy stories, while the last several (plus a large appendix) are about delivering those stories in presentations and media interviews.

You can also get special access to additional Prep Sheets and exercises to use with Living Proof— by joining the authors’ mailing list, which also signs you up to receive their quarterly newsletter with more information about making a difference with the stories you tell, news of other advocates and spokespersons and notices of Living Proof Advocacy Trainings near you.

In the session, John and Tim offered an awesome exercise for mapping your story, as shown on the graphic below. You are asked to identify the sequence of events that provided the shift in your life from then to now. What was the revelation, the epiphany? 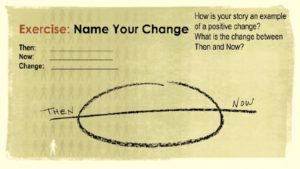